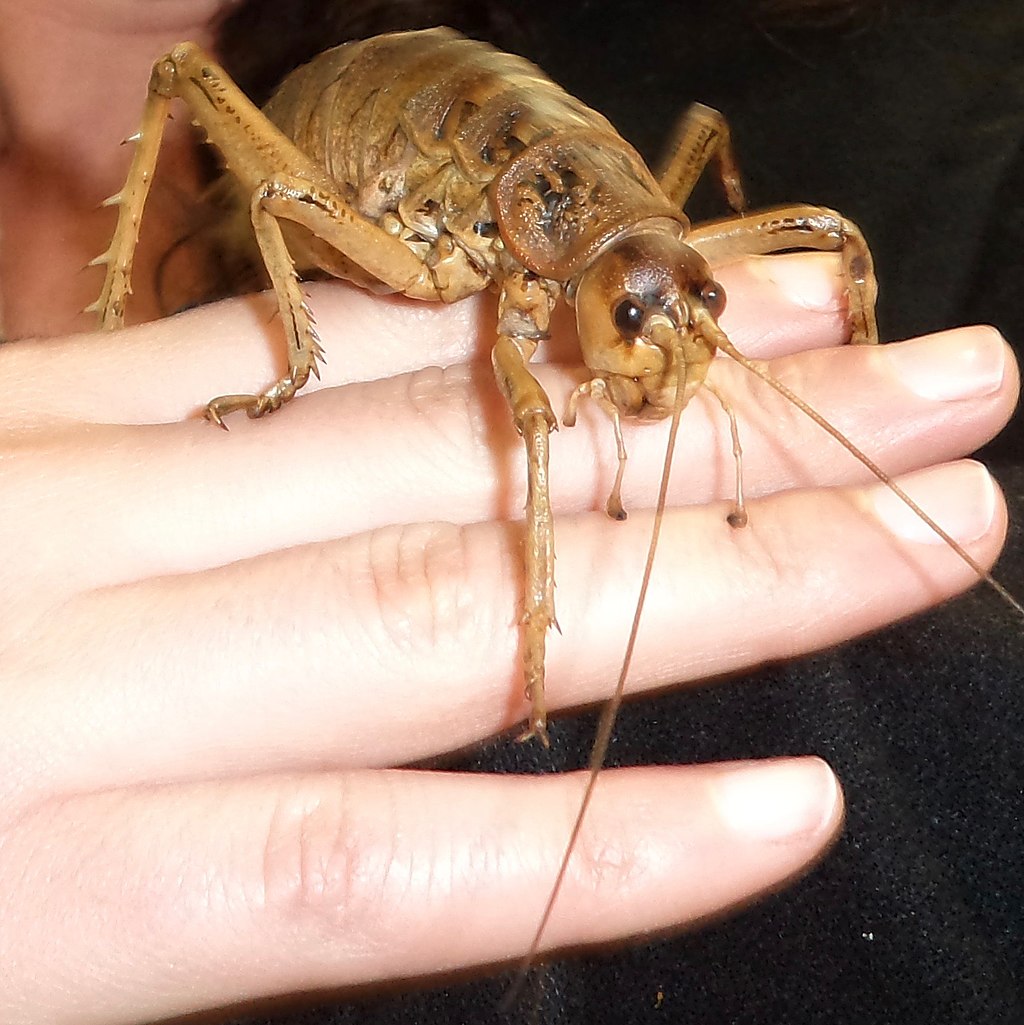 The giant weta is the heaviest insect in the world. It has been recorded to be heavier than a sparrow. There are 70 types of weta in New Zealand and can be found in caves and forests. The best time to see them is when walking in the forest at night.

The largest species of giant weta is the Little Barrier Island giant weta, also known as the wētāpunga, which means the “god of ugly things” in the native people of New Zealand, Maori language.

Little Barrier Island (Hauturu in Māori language), lies off the north-eastern coast of New Zealand’s North Island. Located 80 kilometres to the north of Auckland, the island is separated from the mainland to the west by Jellicoe Channel, and from the larger Great Barrier Island to the east by Cradock Channel. It is an extinct andesitic volcanic cone, roughly circular in shape, about 6 across, with an area of 28 km2.

The giant weta is usually less social and more passive than other weta species. Their genus name, Deinacrida, is Greek for “fierce grasshopper”. Its diet consists of plants (even carrot!), other small insects and fruit. Luckily for me I have never come across this giant creepy crawly!

That’s right, New Zealand isn’t just all about the sheep… Learning about how wildlife evolves on an isolated set of islands in the South Pacific is just an added bonus to living in New Zealand. Museums, wildlife sanctuaries and conservation centres can educate you on New Zealand’s fascinating wildlife mostly made up of birds, reptiles, and insects and not to mention the marine wildlife!

With no land predators, except for birds of prey, birds in New Zealand evolved into a mix of flightless birds and melodic forest birds. As a result, you may find that many birds in New Zealand are likely to come to check you out when you are in forests as they don’t see you as a threat.

Reptiles are a little more elusive, made up with the likes of geckos and the tuatara known as the “living fossil” or “living dinosaur”. In the ocean waters, a boat trip is often accompanied by dolphins and sometimes whales. Seals, eels and stingray are also abundant in New Zealand’s waters.

Let me tell you a few facts about the wildlife that abounds on our idyllic island nation.

There are 6 different species of penguin in New Zealand. Out of the world’s 17 different penguin species, six of them live and breed in New Zealand! The most common species seen when travelling around New Zealand are the little blue penguins, yellow-eyed penguins and Fiordland-crested penguins. To increase your chances of seeing wild penguins in a non-intrusive way is to go on a wildlife-spotting tour.

There are many penguin-spotting options in New Zealand, from the commercial operations where you are most likely to see penguins to seeing them by chance on New Zealand’s beaches.

This all-seasons trail explores the forested shores of Lake Taupō in the North Island of New Zealand, with inspiring views across to the peaks of .

Skirting the shore of New Zealand’s largest lake, the Great Lake Trail features lush forest and wetlands, waterfalls, beaches and panoramic views from a series of lookouts. It is part of the NZ Cycle Trail and is easily accessed from the resort town of Taupō. The whole ride can be spread over two days, or broken into shorter sections of various lengths and difficulty. Overall, the track is smooth and flowing, but a number of moderate hill climbs make this most suitable for reasonably fit riders.

The only downfall I can see with this particular cycle trail is Taupō proximity to the mountains which means temperatures can drop very quickly, even in summer. Stretching from the Bay of Islands in the East to Hokianga Harbour in the West, this journey is rich in history and local hospitality.

Coastal views, wetlands, native forest and rolling farmland can all be enjoyed on this coast-to-coast ride between the popular Bay of Islands and peaceful Hokianga Harbour. Following smooth rail trail, dedicated cycle paths and country roads, it also offers an opportunity to visit historic and cultural sites while enjoying the sub-tropical climate for which Northland is famous.

Riding the trail can easily be factored into a visit to the Bay of Islands, overflowing with accommodation, restaurants and memorable activities from cruising and wine tasting, to visiting the Waitangi Treaty Grounds. Kawakawa, Kaikohe and the surrounding countryside also offer some atmospheric options. Beginning on the slopes of a live volcano, this ride reveals varied natural and human history on its winding, often remote path to the sea.

Starting on the volcanic slopes of Mt Ruapehu, towering above the desert in the middle of New Zealand’s north island, this is an epic journey through two national parks, rolling hill country and Remote River gorges. It reaches a fitting finale at the deep, blue Tasman Sea.

A snow-capped and occasionally smoking volcano signals the start of this epic ride across an otherworldly plateau and alongside a deep wilderness river to the Tasman Sea coast. It’s a journey rich in natural and cultural heritage, featuring such memorable sights as an old cobbled coach road, towering bluffs, the Bridge to Nowhere and the mystical Whanganui River.

The trail is one of 22 Great Rides of the New Zealand Cycle Trail, known in Māori as Nga Haerenga – ‘The journeys’. True to the name, their trail network follows the pathways of those who’ve gone before, traversing a series of amazing landscapes to show you natural wonders and reveal important stories from the past.